Built in 1912 the Moberly Agricultural Fair Association purchased 40 acres south of Moberly from Lena and E. Green Terrill. This 40 acres became part of the Moberly Fairgrounds.

Two tickets booths stood at t the north and main entrance to the fairgrounds. In 1917 the fairground was destroyed by a fire. Urbandale was incorporated as a village in 1927. For 37 years it had a corporate existence and had only women on its official board, know, as “petticoat government”.

The pillars have suffered damage over the years. Recently after being hit by a car, the wood frame of the original ticket booth, window, and door frame of the east pillar was visible at that time. The pillars have been maintained by the residents of Urbandale, even though they stand on City property. 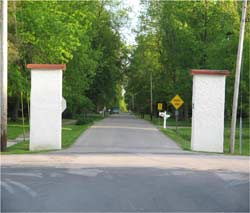